In 1993, Stephen Teague was working construction when the unimaginable occurred: his arm got caught in a machine and he lost four of his five fingers. Twenty years, twelve surgeries, and six Boston Marathons later, including four with the Stepping Strong team, Stephen has since made an amazing recovery. Donna Woonteiler caught up with Teague in July 2021, shortly after he ran the B.A.A. 10K race.

Q: Thanks for talking with me, Stephen. Take me back to the day of your accident in 1993.

A: I was working a construction job when my right arm got caught in a machine. I lost all my fingers except for my pinky and suffered severe tendon and nerve damage that extended from my hand all the way up to my elbow. I was med-flighted to Brigham and Women’s Hospital where, fortunately, Dr. Dennis Orgill and his team were assigned to my case. Of course, this was way before the Stepping Strong Center was established. But today Dr. Orgill is a world-renowned plastic surgeon and a Stepping Strong Research Scholar whose lab focuses on wound healing and tissue engineering.

Q: Reattachment surgeries for severed limbs were not commonplace in 1993, correct?

A: Right. But I did undergo successful nerve transplant surgery. The team took nerves from my left leg and transferred them to the elbow area. Perhaps because I was only 20 years old at the time, the nerves regenerated, and I now have feeling in my arm and hand.

Q: Are you limited in any way because of the accident?

A: I have adapted to the point that there is not too much I can’t do. I work in construction and so far, I can do everything thing I’m tasked to do. I also enjoy working out at the gym, playing golf, and going on bike rides.

Q: You are also able to run marathons! Tell about how you came to be interested in running, and how joining the Stepping Strong community has impacted your life.

A: I started running around 2013 as a way to help stay in shape. Some friends who I run with thought it would be fun to run the Boston Marathon. When I was researching the different charities, Stepping Strong stood out from the others because of the work they were doing for traumatic injury survivors. From where I came from back in ’93, I didn’t have a community to talk to. And now I do. I can’t overstate how meaningful that has been for me. When you meet the Reny family, it’s like they’ve known you for years.

“When I was researching the different charities, Stepping Strong stood out from the others because of the work they were doing for traumatic injury survivors. From where I came from back in ’93, I didn’t have a community to talk to. And now I do. I can’t overstate how meaningful that has been for me.”

Q: The feeling is mutual! You are a beloved part of the Stepping Strong community. I’m thinking back to the time in 2017 when the Boston Celtics honored you as a “Hero Among Us” at the TD Garden. Remember this photo? 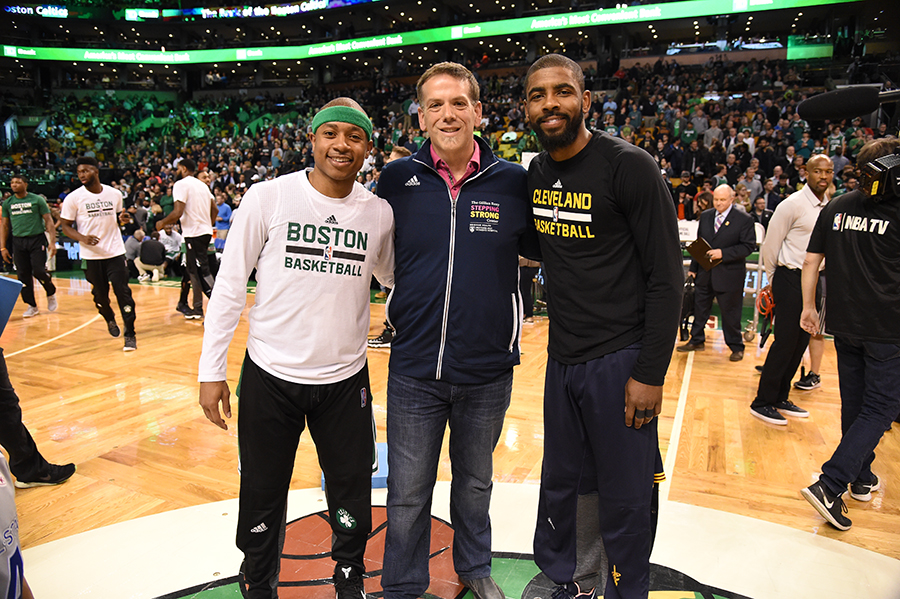 A: Yes! That was such an awesome experience!

A: I’d love to run a couple more marathons, but I wanted to give my body a break for a bit from the training. So, after running my sixth marathon I decided to invest my energy in other ways to support the center. For the last two years, it has been an honor to be the team captain of the Stepping Strong B.A.A. 10K race, which was held virtually in June. I’m proud to say we raised more than $6,500 to support trauma research and injury prevention.

Q: What a great achievement. Congratulations. Any last comments, Stephen?

A: Just that I encourage everyone to get involved with the Stepping Strong Center, which exists solely through philanthropic support. As I mentioned, I ran Boston with the Stepping Strong team in 2016 as a thank you to the doctors and nurses at the Brigham who took such good care of me. 2016 was to be a one-and-done—but I loved everything about Stepping Strong and have since run nine races with them. And now the center is like a second family.