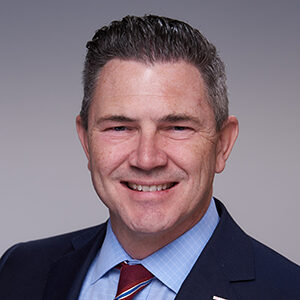 Professional Narrative:
Dr. John Bradley serves as the Director for Mental Health at the VA Boston Healthcare System. He is appointed as Associate Professor of Psychiatry at Harvard Medical School. Dr. Bradley joined the VA in 2011 after retiring from active duty in the United States Army where he served as Chair of the Department of Psychiatry at Walter Reed National Military Medical Center, and Clinical Professor of Psychiatry and Vice Chair at Uniformed Services University.

A native of Massachusetts, Dr. Bradley earned his B.S. in Zoology at the University of Rhode Island, and his M.D. from the Uniformed Services University. He completed his residency in Psychiatry at Letterman Army Medical Center in San Francisco where he served as Chief Resident. His military career included operational assignments for peacekeeping, stability and support operations, and combat operations in Operation Iraqi Freedom with the 528th Medical Detachment. He has also served in academic appointments with UC San Francisco, the Medical College of Georgia, Uniformed Services University, and Boston University School of Medicine. He is board certified in Psychiatry.

Dr. Bradley has been honored to serve on a number of national committees and advisory councils. He was co-chair of the 2013 VA/DoD Clinical Practice Guideline for the Management of Suicidal Behavior. He served as the clinical subcommittee chair and Army representative for the DoD Task Force for the Prevention of Suicide by Members of the Armed Forces. He served as an advisor to the Institute of Medicine of the National Academies of Sciences, Board on the Health of Select Populations. Dr. Bradley has provided expert testimony to the US Congress and served on numerous scientific advisory committees. He has published extensively on the treatment of combat trauma and PTSD, and the management of Suicide Risk.

Dr. Bradley’s awards and decorations include the Legion of Merit, the Bronze Star, the Iraq Campaign Medal (1 Oak Leaf Cluster), the Order of Military Medical Merit and numerous teaching awards to include Harvard Medical School’s Stuart T. Hauser Award for Mentorship in Psychiatry, the Harvard South Shore Outstanding Teacher Award, the Lieutenant General Claire Chennault Award for outstanding teaching faculty, and the National Capital Consortium Psychiatry Residency Teacher of the Year Award which was renamed the “John Bradley Award” in 2011 in his honor.